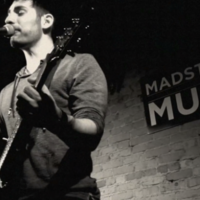 When David Selby walked into Chicago agency SCC for a job interview nine years ago, he immediately felt at home. Why? Upon entering the lobby of the shop, the first thing he spotted was a vintage drum kit that reminded him of his days working as a drummer in college.

“I just melted and went, ‘oh my God, I’m home,’” says Selby, who in addition to his day job as president and managing partner of SCC, is also the drummer and singer of a band called Too Much Dave. “This musical fabric at SCC was a huge draw for me when I first came to the agency.”

Founded in 1989 by Mark Schafer and Tim Condon, the independent agency has always had music at its roots. Back in the ‘90s when the shop was just starting out, Condon said the office always had a drum kit and equipment set up at the ready in case anyone wanted to end the day with a jam session.

“Music has always been one of the principal anchors of our culture,” says Condon, an avid guitar player and chief executive of SCC.

While the agency keeps its musical spirit alive through open mic nights and karaoke sessions for staffers, it also draws inspiration from up-and-coming musicians and bands through its Madstreet Music series, which gives artists the opportunity to play concerts at SCC next to its 24-foot bar. Artists play the venue for free, and in return receive a promotional video put together by SCC’s in-house production team MAKE247 that features footage from the night’s performance and interviews with the band’s members.

The idea for Madstreet Music was born at a Chicago Cubs game a few years ago when Selby and Condon saw a band called Leagues perform. According to Condon, they enjoyed the show so much that they decided afterwards to see if Leagues would be interested in performing at their office for an informal show of sorts.

After the experience proved to be a success, the two decided to continue the in-house performances via the creation of Madstreet Music, which has since hosted artists including country singer Logan Brill, pop singer-songwriter John Splithoff, folk-rock band The Accidentals and singer John Mark Nelson.

"These shows are fantastic, and the artists love it cause they get to come and play in a very funky space. It's acoustically very strong," says Selby.

He added that these emerging artists, which hail from all over the country, often view their performance at SCC as a “respite” from the more professional venues and clubs they typically play at in the city since it’s a more laid-back atmosphere.

“They love playing here because it’s a very low-key deal,” he says. “It’s a chance for them to focus purely on their music, which is great. They’re listening concerts. This isn’t a band playing while we all drink and party on. These are pretty serious concerts where you’re really appreciating the power and potency of the music.”

The agency works with Val Haller, a music curator who runs a boutique music website called ValsList, to find up-and-coming artists who might be interested in performing at SCC. Since Madstreet Music features performers from all over the country, Haller helps SCC identify new musicians that she thinks would fit the agency’s vibe.

“Val does a great job of finding these acts, then we select the ones that we think will be most appealing to our crew,” says Selby.

The free shows - which agency staffers can invite their friends to - are surely a fun perk of working at SCC, but Condon thinks they help boost office morale too.

"It’s good for everyone’s heads in the agency to just sit back with a cocktail, listen to an artist and be able to appreciate that talent," he says. Selby agreed, noting that the inspirational nature of the series makes it a good fit for an agency that has creativity at its core.

“Always being on the lookout for things that are going to inspire our crew and ourselves is a constant pursuit, and these shows are really inspirational,” Selby says. “We’re in a creative business, and giving folks the opportunity to get outside of their day-to-day and really immerse themselves in someone else’s inspiration is kind of cool.”

Click here to read the article on The Drum.